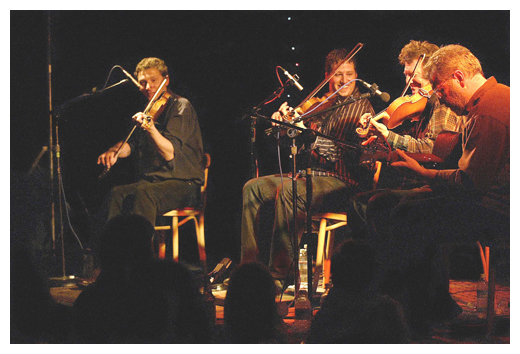 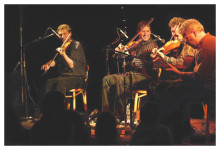 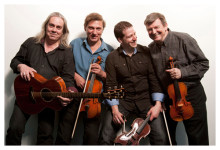 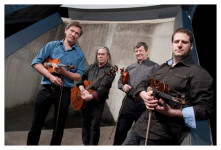 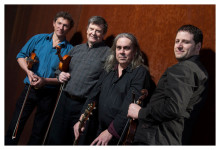 Sold-out tours and standing ovations give testimony to the electricity and excitement generated by the group. Along with acclaimed guitarist Nicholas Quéméner from Brittany, the quartet combines their talents, musical traditions, and spontaneous humor for an evening of dazzling energy and subtle grace. These traditional masters showcase their regional repertoires and together conjure an experience of breathtaking performances.

In concert each artist plays a solo set, showcasing their individual musical styles and traditions, followed by a collaborative set featuring all three fiddlers. Together, they play with such relentless precision and fire that the tunes transcend all cultural and geographical barriers, leaving the audience with a memorable musical experience.

Celtic Fiddle Festival was originally conceived as a unique touring project in 1992, with Burke, Lemaître, and the great Scottish fiddler Johnny Cunningham. The group proved such a success that a live recording was released. That first album, simply titled Celtic Fiddle Festival (1993, Green Linnet), received glowing critical reviews and racked up impressive sales. Four albums and numerous international tours later, the ensemble is now one of the most popular on the Celtic circuit.

Sadly, the world lost Cunningham with his unexpected passing in 2003. The Celtic Fiddle Festival’s live CD, Play On (2005, Green Linnet), was dedicated to Johnny.

Kevin Burke is a world-renowned Irish fiddle master, playing the beautifully fluid, highly-ornamented style of County Sligo. Kevin has been a mainstay of several seminal Irish supergroups, from The Bothy Band to the all-star Irish group Patrick Street, and has toured and recorded with countless artists including Kate Bush, Arlo Guthrie, Paul Brady and Christy Moore. Born in London to Irish parents, Kevin moved to Ireland in the 1970s. Now a resident of Portland, Oregon, Kevin was awarded a National Heritage Fellowship by the NEA in 2002, America’s highest honor in the traditional arts. His most recent recording is Suite, with guitarist Cal Scott, on his own Loftus Music label.

Christian Lemaître is from Brittany, the Celtic region in northwest France. A master of traditional music, Christian honed his playing at festou-noz (festive evening barn dances) throughout Brittany. One of the first to translate traditional Breton music to the fiddle, Lemaître displays unerring control and propulsive energy on the hypnotically rhythmic Breton dance tunes. His style and repertoire shows influences from Southern and Eastern Europe as well. Christian is a member of the outstanding Breton groups Kornog and Pennou Skoulin.

André Brunet is a wonderful young fiddle player from the French-Canadian region of Québec. Formerly with the legendary Quebecois band La Bottine Souriante, he is now a founding member of the talented young group De Temps Antan. He performs a unique blend of folk music originating from France, England, Ireland, and Scotland, imbued over time with a color and rhythm particular to various regions of Québec. André was also featured in the opening ceremonies of the 2010 Winter Olympics in Vancouver. He is a warm, dynamic performer with a vast repertoire of French-Canadian jigs and reels.

A master open-tuning guitarist, Quéméner grew up in Angers, France and studied percussion in the National School of Music. Emigrating to Ireland in 1990, he joined the celebrated Irish group Arcady, remaining with the group until 1994 when he joined the Belgian band Orion. Relocating to Brittany in 1993, he co-founded the traditional Breton dance band, Skeduz. In 1997 and 1998, Quemener toured with the great Breton guitarist Dan Ar Braz and his fifty-piece group, Heritage Des Celtes. In addition to working with Kornog, he continues to play and record with a number of acclaimed Breton and Irish artists.

Mesmerizing…Celtic Fiddle Festval ratchets up the temperature as they ricochet through everything from magnificent Québecois tunes to Breton marches to the Irish tradition. Siobhán Long, The Irish Times

They wowed the audience with quick-step jigs and reels as well as beautiful, soulful melodies. Burke’s Irish reels were silky smooth, each note crisp and clear. – The Christian Science Monitor

A treasurable meeting of minds, music and cultural roots, this collaboration between premier league fiddlers lays on a four-course feast of choice Celtic delicacies. – The Scotsman

… Among the world’s greatest Celtic fiddlers. Whether alone or á trois, they possess a breathtaking virtuosity. – Philadelphia Weekly

The juxtaposition of fiddle styles was fascinating … electrifying … a refined sonority and brilliant violinistic command. – The New York Times