An Evening With Kevin Burke 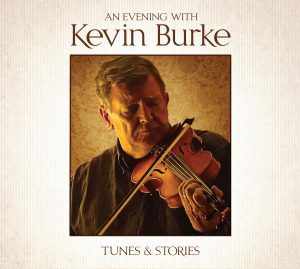 An Evening with Kevin Burke, The latest release from Loftus Music,(LM009,) is a live concert recording. It brings the listener directly into the concert theatre for a highly personal and captivating musical experience from this renowned fiddler. Recorded in Ireland, Philadelphia and Kevin’s adopted hometown of Portland, Oregon, the exceptional fiddle music and the engaging stories beautifully capture the charm and intimacy of his solo appearances.

To quote from Kevin himself: “ When I was a young boy I often found that what the older musicians had to say was just as intriguing and enriching as the tunes they were playing. Influenced by those previous generations I often tell stories (usually light hearted and sometimes true) during my concerts in order to illustrate something about the music …… On this CD, I have included various excerpts from these stories and personal reflections in an effort to transform the formality of the concert hall into something more reminiscent of an evening with friends gathered together to exchange their stories and their music. “

After a decades long career highlighted by numerous traditional and experimental collaborations and recordings, a glimpse is offered into the power and beauty of the unaccompanied fiddle music that initially inspired Kevin when he was a boy. A lifetime of musical inspirations is reflected in these performances of mostly traditional tunes covering a span of some 300 yrs – Kevin’s own tune, “Across the Black River”, (dedicated to his mother’s home in Masshill, Co. Sligo) is from the early 21st century while the O’Carolan pieces date back as far as the early 18th century. Kevin has included selections from several Irish regions renowned for the richness of their culture – Kerry, Clare and Galway for example – and his London upbringing is reflected in the music he heard there as a boy (“Lucy’s Fling”). It’s not at all surprising that echoes of Sligo can be heard in all of Kevin’s playing since his grandad, his father’s aunt and his mother’s uncle were all Sligo fiddlers.

The selections on this CD are all inspired by experiences drawn from playing in venues as varied as candlelit thatched cottages in Ireland, the Guildhall School of Music, the Albert Hall, the Grand Ole Opry and recording studios in London, Dublin, New York and Hollywood, to name just a few (not forgetting numerous vans, cars, buses and trains!)

Recapture an eloquent evening of wonderful fiddle music in the company of a master fiddler.