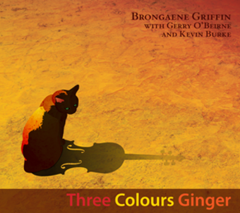 A delight for music lovers and cat lovers alike. Produced by Gerry O’Beirne, this album showcases not only Bronnie’s beautiful fiddle playing but also her fascination with our feline friends.
She met Kevin not long after he first arrived in Portland, OR and soon became one of his students. For this, her first release, some of her notable musical friends were delighted to join her on the recording — Kevin Burke, Johnny Connolly, Nancy Conescu and more — and she even persuaded Kevin to read some of her favourite cat poems!
The beautifully designed cover artwork gives just a small indication of the care, attention and affection that went into making this charming CD.
… a wonderful album. I can see this CD staying near the stereo for a long time Irish Edition