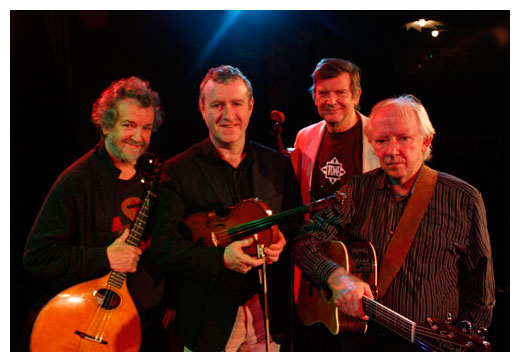 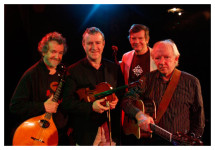 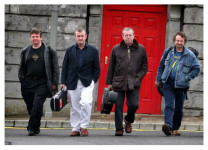 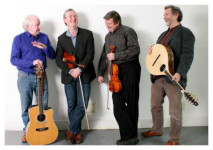 Veterans of Planxty, the Bothy Band, De Dannan and more, Patrick Street represents the distillation of a crucial new strain that emerged in traditional Irish music some twenty-five years ago. – Tim O’Brien

Kevin Burke, Andy Irvine, Arty McGlynn and John Carty – collectively known as Patrick Street – are known throughout the Irish music world as four of its most brilliant players. On a repertoire steeped in traditional music, the band’s tightly executed arrangements and unparalleled musicianship know no equal. Beginning as a one-time tour of four recognized masters, more than two decades and eleven albums later this “supergroup” has reached legendary status. Mesmerizing, says Billboard, … a must for those who love Irish music.

Other distinctive artists that passed through the ranks of the band include guitarist Gerry O’Beirne, fiddler James Kelly, uilleann piper Declan Masterson and guitarist, Ged Foley. In 2005 the Street widened it’s talents with John Carty.

The consummate Irish fiddler, Kevin has given to the band’s sound and repertoire the highly ornamented Sligo style for which he’s known. Andy Irvine is one of the great balladeers of Irish music, and his bouzouki playing has long been a standard by which others are judged. He brings his shared passions for Eastern European rhythms and American folksinger Woody Guthrie to the band. Arty’s beautiful tone and inventive guitar licks provide ideal underpinning for Andy’s intricate songs and the group’s blistering sets of reels and jigs. Patrick Street brims with the spirit and sensitivity of Irish music at its best.

With the relaxed grace of masters, Patrick Street use their breathtaking virtuosity to display this ancient music at its wild and humble best. – Scott Alarik, The Boston Globe

With the possible exception of the Chieftains, there’s no better Celtic music group in the world right now than Patrick Street! – The Washington Post

Mesmerizing … a must for those who love Irish music. – Billboard

Masterful musicians clearly at ease with one another, … perfect harmony Folk Roots