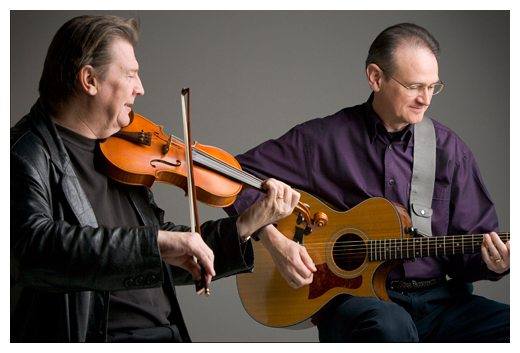 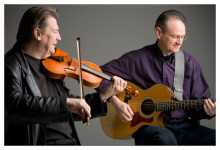 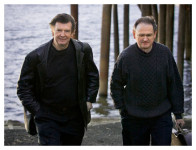 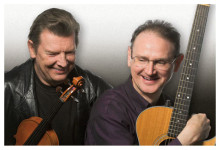 Kevin and Cal first met while working on music for a television documentary about “The Troubles” in Northern Ireland. Cal was commissioned to compose the score and contacted Kevin to consult on the project.

Kevin Burke is one of the commanding presences in Irish music. Early in his career he established himself as one of Ireland’s premier fiddlers. He is inextricably linked in the annals of traditional music with his role in the near-legendary Bothy Band in the 1970s. After moving to Portland in 1980, Kevin Burke and Bothy Band guitarist and singer Micháel O Domhnaill teamed up again and produced two classic albums: Promenade and Portland, which received critical acclaim. Kevin was a founding member of Patrick Street in 1985 and 10 albums later, Kevin still tours with this supergroup all over the world. He has toured extensively with the Celtic Fiddle Festival since the 1990s as well. Being at the forefront of traditional Irish music for nearly 30 years has gained Kevin Burke a remarkable reputation as the consummate artist as both a solo and an ensemble player. Joining the ranks of other great performers like B.B. King and Doc Watson, he was recognized by the National Endowment for the Arts in 2002 and received a coveted National Heritage Fellowship. It’s impossible to list all of this artist’s performing credentials in this space. Check his website for more bio!
Performer website: www.kevinburke.com

Cal Scott is a remarkable multi-instrumentalist whose professional credentials span a wide range of music, from traditional to bluegrass to jazz and everything in between. He plays and sings in the 8-piece folk ensemble The Trail Bandand is also a noted composer and arranger with dozens of scores for documentaries, films and commercials under his belt. In 2006, his film score for Scotland’s Lighthouses was recognized by the Just Plain Folks Music Awards with 4th place in the Celtic Album of the Year and 5th place in the Celtic Song of the Year. Kevin Burke and Cal Scott met each other while Cal was working on a documentary about Northern Ireland and Kevin was brought in as a consultant. This musical collaboration led to their working together ever since then.
Performer website: www.calscottmusic.com